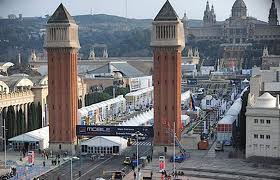 This is Barcelona week and you are probably fed up to the teeth with press releases and news emanating from this Catalonian stronghold. The Insider has spent a lot of time talking to delegates, press people and exhibitionists (I think that’s the right term for the people working the stands, especially CBOSS), to get the real gossip.

Firstly, MWC this year is BIG. It’s definitely bigger than the last three years at least. The throngs of people in every hall are so large that at times it has been difficult to even get in the main entrances. The Insider ‘attendee gauge’ is to check cloakroom space at the venue. On Tuesday, every cloak room except that in the bowels of Hall 4 was filled to capacity. Them’s big numbers, as they say!

Of course, the Nokia and Microsoft news dominated the stage on Monday with Steve Ballmer’s keynote infomercial shared with Nokia’s Stephen Elop and rather scary presentation of Windows Phone 7 upcoming features. Let me premise the following statements by stating that the next iteration of WP7 looks great and addresses many of the features missing in the first release.

Microsoft’s Joe Belfiore was tasked with showing off the new stuff and elected to demonstrate before what is probably the mobile world’s most discerning audience. Things did not go as planned for Joe when he curtailed one presentation due to ‘network congestion’ in the auditorium. Thirty seconds later though, he was able to show a ‘live’ comparison of a yet to be released HTC phone running Internet Explorer 9 against an iPhone. Who’d have ever thought to see a Microsoft employee using an iPhone publicly?

The demonstration featured fifty or so fish swimming fluently in unison on the WP7 screen but staggering on the iPhone. The fact that they were swimming vertically did not seem to phase anyone but the journalist sitting next to me was in wonderment at how the internet access had suddenly reinstated itself and was able to provide bandwidth to the two devices.

Yes, the Insider is nit-picking again, but one wonders why Microsoft did not spend a few grand to have a fibre connection brought in to a wifi router sitting under the podium. When Steve Jobs used the same excuse he was lambasted by the press, go figure.

Google’s outgoing CEO, Eric Schmidt, was the other big drawcard at the event. In his swan song presentation he said he was disappointed that Nokia had elected to adopt Microsoft’s Windows Phone 7 over Android, but that Google was still keen on a future deal.

“We’d like them to adopt Android, and we certainly tried,” he said during a Q&A session following his presentation. Schmidt also said that, “the offer remains open” should Nokia change its mind.

Well, that is an interesting comment! The Nokia-Microsoft deal is not just about a mobile phone operating system and includes many of Nokia’s core products. Nokia Maps, for example, will be utilized by Microsoft’s Bing search engine bringing into direct and stronger competition with Google. Wouldn’t it be interesting if Google decided, just for fun, to buy Nokia? It could probably do so with money its petty cash drawer.

Enough dreaming of future headlines. The Insider is heading back out for day three of the annual phone-fest. Things are certainly more positive this year. The recruitment agency barometer is almost off the scale. It seems they are everywhere, lurking around stands, in coffee shops and bars waiting to pounce on any unsuspecting prospect. Our industry MUST be in good shape!